Ardrossan, North Beach The Isle of Arran in distance, Ayrshire © Leslie Barrie
Corona Virus News
Cases in the Stevenston area
Latest UK and Global News
Symptoms of Corona
When to call an ambulance

Dating around Stevenston!
We have one of the UK's largest dating websites - focused on [postal town]!  There are mature, all age, Asian and Christian singles just waiting to hear from you. Browse and upload your profile FREE ! 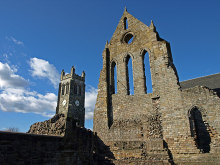 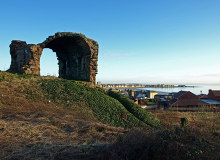 Want to advertise on this website? Create your advert now.

Much is perfectly clear about the early history of Ardeer Parish Church and the Mission, established in 1881, from which it sprang.  While all the old material and records, inevitably, do not shine out down the years while equal lustre, that need not perplex us: - history, in a sense, is on our side since we know our founder and His assurance, the One, “whose light is truth, whose warmth is love”.
The word “Ardeer”, only a little fancifully, sounds like “our dear”.  In remembering “our dear Church” we are mindful also of the enduring glory of His dear universal Church, to which all Christians have belonged for two thousand years.  With this in mind, let us begin with a quotation.

“Ardeer Church, whatever else it might be, is not a sleeping church or a dead church, but a vivid and vital, a living and lively one… I give you a Moderator’s benediction, I big you God speed”.

These were the words of the Moderator of the General Assembly of the United Free Church of Scotland, the jovial Rev. C. G. McCrie, DD on 3rd April, 1908.  It was a time of anniversary – yes, even in 1908, for our congregation was already celebrating the year 1883, twenty-five years before when its Mission hall, now our large hall, was built.  We now look back to those very early years, described by Mr. Moodie, our first minister, who arrived in 1892 as one of the happiest periods of the history of our church.  Now, as then, we go forward in faith.  The constant vigilance and commitment referred to by St. Paul when he lamented “the church at Loaodicea” would not have been far, perhaps, from the Moderator’s thoughts when he gave us his little Lauren in words: - no church anywhere, at any time, can afford to rest on its laurels!

By late 1881 the Kilmarnock and Ayr Presbytery of the United Presbyterian Church had decided to begin mission work at Ardeer.  Three factors seem to have swayed this decision.  Firstly, they noted that only 500 of the town’s population of 5,000 went to the two Protestant churches here.  Wheat prospects for evangelism!  Secondly, with its method of finance the UP Church was most at home in the towns and cities; Stevenston was no longer chiefly a rural place.  Thirdly, their evangelical meetings here had been a success and David Donaldson’s little Sunday School promised some results.

The Rev A. Morris Moodie was to call Mr. Donaldson “the Father of our church”.  An Irvine man and former Divinity student turned stationmaster, he taught the children the scriptures at Mr. Williamson’s Ardeer School (the old part at the rear of what is now Ardeer Community Centre; local conservatives purchased it in 1893).  When he came here in 1870 this was the only real building on the Ardeer side of the G & S-W railway.  There was an average of four or five children to a family.  Perhaps some of them hunted rabbits.  6,000 of them were caught annually in Stevenston some years before.  After leaving Stevenston, he went on to become provost of Saltcoats.  In 1905, when the white-haired General William Booth, founder of the Salvation Army, visited Saltcoats to be greeted by huge crowds lining the streets – in that altogether more religious age – it was the venerable Mr. Donaldson who stood up and proposed the vote of thanks to him.

Ardeer was greatly blessed by the two hard-working, first-rate UP missionaries who came: - Robert Hamilton from Kilmarnock, who was here from April 1882 until October 1887 and James Westwater from Kirkcaldy, with us from December 1887 until March 1891.  Mr Hamilton was a popular and effective preacher in and around the town, drawing in crowds from the farm houses in the district (NB: roughly 20 farms).  He helped the local UP committee under the estimable Rev. George Philp to raise funds for a proper Mission hall, to which as many as 250 children were to come.  The Home Missions Secretary for Scotland, the Rev. Dr. R. S. Scott opened the hall on the first Sunday of July, 1883.  Surprisingly, it seated as many as 280.  Demands on heating were high.  Attendances were such that the hall grate was completely worn out by 1889.  The debt of £450 was paid off by 1890 with much sacrifice and help from local UP churches.  Interestingly, the ancestor of Patrick Warner, from who we leased the feu, was the famous Rev. Patrick Warner, who, long before dying here in 1722, had been a covenanting preacher 1677-79 in the fields of Carrick and Galloway, alongside John Walsh, the great grandson of John Knox.

Quite a few missions in very poor areas such as ours were not a success: they failed to achieve the financial viability which was a prerequisite of congregational status.  1884 was a bad year, when 200 Stevenston miners were thrown out of work and weekly church collections sank to just ten shillings (roughly 50p at time of printing).  The miners, who generally saw the light of day only on Sundays, earned two shillings a day at most.  But the Mission preserved.  Local children flocked to the new hall twice on Sundays – for the forenoon children’s service and then to Sunday School.

“The child, the seed, the grain of corn,
The acorn on the hill,
Each for some separate end was born
In season fit, and still
Each must in strength arise to work
The Almighty Will”

Adults came to the huge Monday Bible Class.  There were often two prayer meetings a week, a kitchen meeting in Station Square, a Saturday Bible reading and periodic evangelistic meetings in the two Squares.  Worship was always their first priority.

On the morning of the 9th of May, 1884 at the new explosives factory there was a tragedy about twenty minutes to nine, when the no. 7 cartridge hut blew up, killing eleven girls.  One of them Martha McAllister, was a leading choir member of the Mission – also a children’s monitor.  The night before the tragedy she was singing to her mother and sister about Jesus’ triumph over death.  Minutes before the explosion itself, and again showing her Christian witness, she sand “In sweet bye-and-bye”, the words including “The Father waits over the way to prepare us a dwelling place there…we shall meet on that beautiful shore”.

Long after Mr. Hamilton left, he was the highly welcome guest preacher at Morris Moodie’s semi-jubilee in 1917.  Under James Westwater, the official membership of the Mission, always small, doubled to 64.  He conducted seven weekly meetings, started all-important monthly social meetings and three managers were elected.  By this time there were both morning and evening adult services, with the children coming to afternoon Sunday School.  Congregational status was conferred on 11th November 1890.  Afterwards he ministered at Blyth, Northumberland and Mr. (later Dr.) John Cairns succeeded him here for some months.

The Building and Opening of the Church

The Building and Opening of the Church

Andrew Donaldson once observed in a speech that Mr. Moodie was so excited by the prospect of a beautiful new church that he practically slept on the premises during its construction.  Although it was important to him as a place, it was far more than that: - it was special as a symbol of holiness and Christian hope.  In 1897 he declared in a funeral sermon, “We worship this morning in a temple – the temple of immortality-which stands firm upon the rock of the risen Jesus”.  Any church would have been home to him.

More mundanely, grants of money from various sources were received – from the Ferguson Bequest Fund, the UP Church Building Fund and Mr. James Campbell of the Bank of Scotland arranged a £2,000 overdraft.  All this came about after a small congregational meeting of 9th September, 1882 boldly decided in favour of building a church.

In A. L. Drummond’s book, “The Church Architecture of Protestantism”, some of the warmest praise of this very fastidious writer is reserved for part of the world of Hippolyte Blanc (1844 – 1917), who was our architect at Ardeer.  Born of French parents in Edinburgh, his reputation was always high, being eclipsed only be his older contemporary Sir Robert Rowand Anderson and his younger rival Sir John Jonas Burnet; the work of Peter McGregor Chalmers was frankly more popular.  However, Blanc’s design of the Coats Memorial Baptist Church in Paisley (1893) won great acclaim – “a veritable cathedral in red sandstone… a very notable achievement”.  He did restoration work at Edinburgh Castle.  Upon rare occasions he was perhaps a shade too decorative for the true soul of Presbyterianism, according to Drummond!  Interestingly, the little spire which he had intended to surmount the tower (a drawing exists) never materialised.  A hint from Mr. Moodie and friends?

The church was designed in the Gothic style of the 15th century – a style one can see chiefly in the window design and the main gable front towards the roadway.  Red sandstone was brought in from Ballochmyle Quarry.  The eight pinnacles on the tower, each bedecked with crosses, are now long gone.

Hugh Slaven, convener of the UP Central Building Committee, laid the Memorial Stone of the church in a great ceremony on 12th May 1894.  It is, of course, still visible, about 30 feel up the tower.  Enclosed in a jar behind it are: the UP magazine; the Missionary Record of the Presbyterian Church; the Children’s Missionary Magazine; a sketch of the history of the congregation; the roll of members and list of office bearers; literature connected with the organisations of the church; the chief current coins of the realm; a plan of the church; photographs of the Rev. Mr. Moodie and Mr. Reid the builder; copies of the Ardrossan & Saltcoats Herald, the Stevenston Gazette, the Glasgow Herald, the Scotsman, the Scottish Leader and the North British Daily Mail.

A year later the church was officially opened on Friday, 14th June, 1895, the dedicatory service being conducted by the Rev. Alexander Robertson McEwan, Claremont Church, Glasgow, who in 1915 became the Moderator of the General Assembly (UF).  His sermon was based on Psalm 118:22.  The aged Rev. James Wardrop born (1821), Professor at the UP College, preached on Sunday, 16th June from Psalm 31:19 “O how great is thy goodness, which thou hast laid up for them that fear thee”.  Mr Moodie’s first sermon in the new church was to the children, significantly enough, on the afternoon of Sunday, 16th June.  He said that in a special sense the church belonged to the children.  “When the old people are passed and gone and their voices hushed in a silence, the children will still be in the building worshipping God”.

We hope to upload more soon, so watch this space!

This Microportal is built on the 2day Microportals platform which provides you with 3 click access to local and global information crucial both to your personal and working life. The platform provides live local data on transport, what's on, accommodation, eating out, shopping, sport, religion and weather as well as comprehensive reference and resource sections including TV, radio, online shopping, route planning, health, education and more.